A lot has been happening lately (mostly me spiraling into a pit of depression, hardy har har!) and I have really let this blog fall by the wayside. So here I am, blogging once more! Back in the first week of May, my parents both visited me. Obviously not together, because I think when they come together the tectonic plates shift and cause volcanic eruptions, tsunamis, and all other like catastrophes. Seperately.

First, my papa bear. We started out our visit by taking a harrowing trip to find a Sonny’s Bar-B-Que. My favorite part of the ride was when it was over and we were finally heading home and I saw a Cthulhu bumper sticker on the car parked next to mine.

I really like going to theme parks with my dad because he’s only of the only other people I know who has the same enthusiasm for the storytelling. We always enthusiastically ride the Carousel of Progress, which is an original Walt-designed attraction, and one of the only ones left.We started out our morning at Hollywood Studios, where we rode Toy Story Mania, Star Tours, Tower of Terror, you know, all the biggies. We did not see the Indiana Stunt Show Spectacular, which may be a first for a trip with my dad. We went to Pizza Hut for lunch, which (as everyone who knows me knows) is one of my favorite places in the whole world. They have unlimited Diet Pepsi, all-you-can-eat pizza, and children’s books. What’s not to love? The staff at the one down the street all recognize me, to the point where I think I’m considered a regular. But I digress.

After lunch, we went to Magic Kingdom, my humble home. I’m not going to list all the rides we went on, because it’s tedious and boring and I’ve done it six times already. But we went on many rides, and ate many churros, and fun was had by all. One attraction we went to that I usually bypass is the Country Bear Jamboree. I can’t remember ever visiting it as a child, and most of my Disney memories are in vivid color in my head, so it may have never happened. It’s another Disney relic, so I forced my dad inside so I could at least know what the heck it was. It’s basically a medley of western-style songs, bluesy and folksy and pretty sad. There was one song in particular that I enjoyed, sung by three little bears in bonnets. I embedded it below. I think you’ll understand why I liked it.

I also forced my dad to accompany me as I tried a “Citrus Swirl,” an ice cream treat that used to be at Magic Kingdom in the 70s when we opened, but quickly disappeared with the Orange Bird, the Florida Oranges’ mascot. But now, the Orange Bird is back, and he brought the Citrus Swirl with him, and it is heaven on Earth. 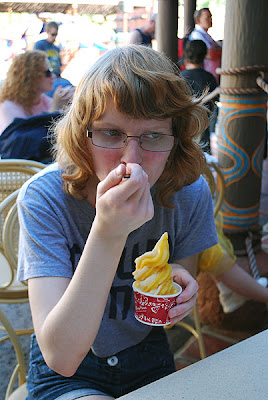 The rest of the day is a bit of a blur, but I know we had fun! I also got to witness my dad brag about me working in the park, which is kind of nice because I’m never doing anything worth bragging about. He was talking to a family that we had seen at the opening of Hollywood Studios that morning. We had been standing near them for the Main Street Electrical Parade, and while we waited for Wishes, I recognized them and weirdly talked about it instead of keeping it to myself. But it was okay! I think I probably cried during Wishes. I always do when I’m with my family. Crybaby.

I think I’m going to put my mom’s visit in another blog, just so it doesn’t become a super lengthy post. But there! I did it! Hurrah!